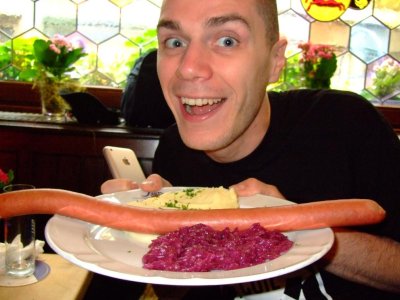 A member of the Orengo group since June 2008, I am the technical lead on the FuncNet platform, which brings together an ensemble of protein function analysis tools from various groups around Europe. This work is supported by the EU-funded EMBRACE and ENFIN research networks.

I'm involved in various other initiatives to extend the capabilities of CATH and Gene3D and enable them to interoperate better with bioinformatics resources at other organizations.

I also write and maintain biotext.org.uk.

I am a data scientist and software developer with experience in the fields of molecular biology, clinical research, public health and the pharmaceutical industry.

My MSc and PhD projects at Birkbeck were on text mining techniques for bioinformatics, and this is a field I am still involved in. My thesis, supervised by Dr. Adrian Shepherd, was on parsing sentences into phrase structure trees and dependency graphs, and extracting facts about gene regulation from these syntactic structures.

As an undergrad I studied History and Philosophy of Science at UCL and I am still interested in the history and public perception of science, technology and medicine.

Outside of the lab, I'm the sole developer of the GraphSpider/MPL natural-language processing toolkit, and also involved with Smesh, a platform for analysis of social media data.

Contributor, The management of bacterial meningitis and meningococcal septicaemia in children and young people younger than 16 years in primary and secondary care (National Institute for Health and Clinical Excellence, 2010).

Contributor, Reducing differences in the uptake of immunisations (National Institute for Health and Clinical Excellence, 2009).

Andrew B. Clegg and Adrian J. Shepherd, “Syntactic pattern matching with GraphSpider and MPL”, in Proceedings of the Third International Symposium on Semantic Mining in Biomedicine (SMBM'08) (Turku, Finland: 2008).

Andrew B. Clegg and Debbie Pledge, “Streamlining the clinical guideline production process with fuzzy citation matching”, in Proceedings of the First Conference on Text and Data Mining of Clinical Documents (Louhi'08) (Turku, Finland: 2008).

Christian Guy, Emma Goddard, Emily Milner, Lisa Murch, and Andrew B. Clegg, “Looking into the core of the sun”, in Hasok Chang and Catherine Jackson (eds.), An Element of Controversy: The Life of Chlorine in Science, Medicine, Technology and War (British Society for the History of Science: 2007).

Andrew B. Clegg and Adrian J. Shepherd, ”Evaluating and integrating treebank parsers on a biomedical corpus”, in Proceedings of the Association for Computational Linguistics Workshop on Software (Ann Arbor, Michigan: 2005).

Along with Cass Johnston and Nathan Harmston, I run an informal meet-up group for bioinformatics people and anyone else interested in the technical side of what we do: London BioGeeks. We have monthly-ish technical meetings (with talks) and social nights (with beer). Come along sometime. I'm also involved with the London Java Community and Clojure Dojo.

I'm an occasional peer reviewer for Bioinformatics and the Journal of Biomedical Informatics, and I was on the programme committees for Louhi 2008, the BioNLP 2009 shared task, and the ACL 2010 track on “NLP for biology, medicine, law, etc.”

On a slightly less geeky note (or perhaps not) I am interested in electronica and avant-garde music, linguistics, London and cycling. Not usually at the same time, though. I also DJ occasionally at events like the Drones Club and write music reviews for websites such as Connexion Bizarre.

My main site is at http://biotext.org.uk. My Birkbeck homepage still exists, for historical value only.